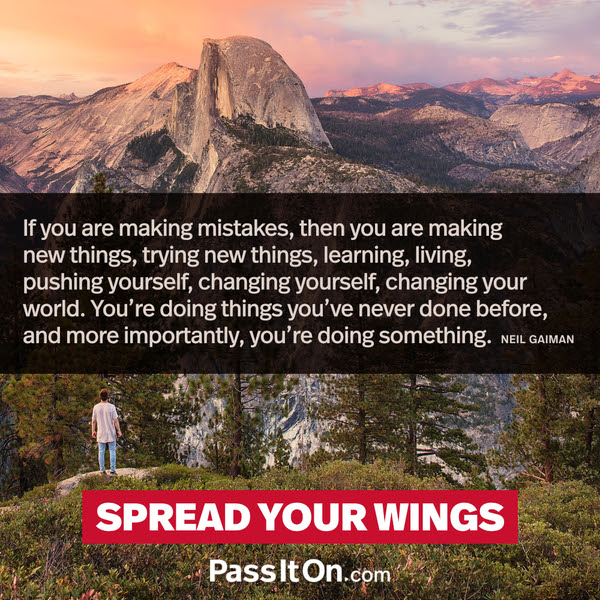 Mistakes.  We all make ’em.

But have you ever stopped to think about the beauty in a mistake?  The vulnerability?  The dream achieved if it all went well? Getting into the action instead of standing on the sidelines?

Honestly? I have but they still scare the bejeezus out of me.  I’m sure it’s the fear of exposure.  That feeling that you are standing on a stage naked in front of a laughing audience.  It’s the fear that people will see you for who you are.  An imposter who, while she thinks she knows what she’s doing, she doesn’t really.

And that, my friends, leads to paralysis.  You know, the Netflix binge.  Hours of screen time getting little to nothing done.  Worry.  Incessant worry.  Only you worry about things you have absolutely no control over.  Because if you focus on that, you don’t have to deal with the stuff that you can actually have an impact on.

In the last couple of weeks, I’ve fallen into a pattern of putting the stuff I know I should do to the side and opting for paralysis.  Part of it is being busy.  Work.  Home.  You know, life.

The other part?  Not wanting to make mistakes.  The logical part of me knows that the things I need to work on are fairly low stakes.  They are not life or death.  They will not impact us financially.  If I do what I need to do, all the things could have a positive impact on my family.

But what if I make a mistake?  What if I’m not successful?  What if?…

But what if the mistake leads to something beautiful? What if it turns out the mistake wasn’t a mistake at all, just a different way of getting to the same destination?  What if?…

Not taking action comes from a place of fear.  And for the love of Mary, how many blog posts have I written about moving through your fear to the beauty that lies on the other side of it?

But here’s the thing.  I miss writing.  Pouring out the things that come into my head has provided me with a form of low cost, very public journaling.  It’s cathartic.  It’s therapeutic.  And it’s in putting myself out there.  To make mistakes.  And maybe, if I’m lucky, to make a difference.